Marcia Williams is retelling Macbeth, a famous play by William Shakespeare. Although the play has been retold, some of the original Shakespeare language is used.

Macbeth is the story of a man called Macbeth who meets three witches whilst returning from battle with his friend Banquo. The witches share some predictions about Macbeth’s future, including that he will one day become King of Scotland. Since Macbeth’s cousin (and boss) is King Duncan, Macbeth does not initially believe this. However, his wife, Lady Macbeth, is very ambitious and would love to be Queen. A dark plot unfolds...

Read the extract below and consider the following:

On a foul, bleak night, rain lashed across the Scottish heath, and through the roaring thunder and cracking lightning came an unearthly cry:

'When shall we three meet again? In thunder, lightning, or in rain?'

'When the hurlyburly’s done,' came the answer. 'When the battle’s lost and won.'

'There to meet with Macbeth,' said a third voice.

The following morning, the beating of a drum could be heard across the same bleak landscape. Closer and closer it came to the place where the unearthly cries had been heard. The drum beat heralded Macbeth and Banquo, two Scottish generals returning home to Inverness.

They had just defeated an army of rebels who had risen against Macbeth’s cousin, King Duncan. Few had ever seen such courage as the two generals had shown in the battle. It was said that Macbeth had brandished his sword with such speed that it smoked with the blood of his enemies. Certainly, both men were so stained with blood that even the pouring rain could not remove it.

'So foul and fair a day I have not seen,' shouted Macbeth against the storm.

Suddenly, as if from nowhere, three weird creatures rose out of the gloom. Both men stopped in their tracks.

'What are these, so wither’d and so wild in their attire?' gasped Banquo.

The creatures seemed to be women, but they had beards. Were they real or were the generals imagining them?

'Are you aught that man may question?' asked Banquo. He had heard that there were witches living on the heath who could tell you your future.

The three witches, if that is what they were, put their bony fingers to their skinny lips as if to silence Banquo. They turned to Macbeth.

'All hail, Macbeth,' cried the first. 'Hail to thee, Thane of Glamis!'

Macbeth was taken aback - the first witch had addressed him correctly, but how did she know who he was?

'All hail, Macbeth! Hail to thee, Thane  of Cawdor!' said the second, which was strange, as he was not the Thane of Cawdor.

Strangest of all was the third witch’s greeting: 'All hail, Macbeth, thou shall be king thereafter!'

And that was the first extract from ‘Macbeth’ retold by Marcia Williams. I’ll be reading you another one tomorrow.

Read this second extract below and cosider the following points:

Macbeth couldn’t wait to tell his wife all that had happened, so he sent a letter ahead to her.

Her excitement grew as she read it, for she was even greedier for power than Macbeth. She could already see the golden crown of Scotland on her husband’s head. Macbeth was ambitious, but he had a sense of honour. Lady Macbeth was quite ruthless and only honoured power and ambition. She was capable of destroying anyone who stood in her husband’s way.

When she greeted Macbeth she saw that his thoughts had also turned to murder, but she was worried by his lack of cunning.

'Your face, my thane,  is as a book where men may read strange matters,' she warned him. 'Look like the innocent flower, but be the serpent under’t.'

Their talk was interrupted by the arrival of King Duncan and his two sons, Prince Malcolm and Prince Donalbain. The king was delighted by the sweet air around the castle, and by Lady Macbeth, who appeared so charming and welcoming. But Lady Macbeth was secretly urging her husband to kill him that night.

In preparation for the evil deed, Lady Macbeth drugged King Duncan’s two guards, who lay beside the king as he slept.

Now that murder had become a reality, Macbeth was agonizing over it. King Duncan was a good and gentle man, and a guest in Macbeth’s house. It was his duty to protect the king, not to murder him.

'We will proceed no further in this business,' he told his wife. 'If we should fail?'

'Screw your courage to the sticking-place and we’ll not fail!' Lady Macbeth scorned.

So, swayed by his wife, Macbeth reluctantly agreed to murder the king as he lay in bed that night. Lady Macbeth’s evil heart swelled with satisfaction and she retired to her chamber to await the time. 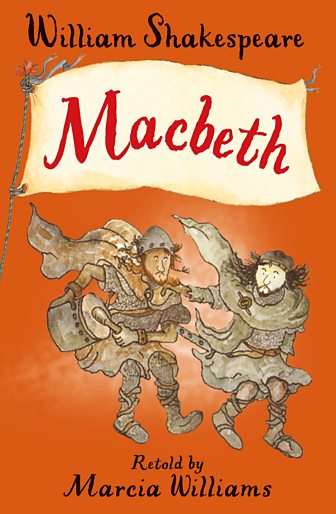 This video is for educational purposes. Rated 'Universal' by BBFC.

One has been done as an example for you.

Look at what Lady Macbeth says to Macbeth and how she says it. Do the same for Macbeth.

Think about how they behave towards each other.

In the extract Lady Macbeth is trying to persuade Macbeth to kill King Duncan so that he can be King and she can be Queen.

She advises Macbeth by saying 'Look like the innocent flower, but be the serpent under’t.'

This means that Macbeth should look like an innocent flower, but be the serpent underneath.

You can use modern-day phrases to explain her advice.

Where are the Galápagos Islands?

The Galápagos Islands are an archipelago or group of islands that have been created by volcanoes. They are found in the Pacific Ocean, almost 1,000 km from the coast of Ecuador in South America.

The islands are at either side of the Equator, which means they are in both the Southern and the Northern Hemisphere.

The Galápagos Islands are home to lots of different types of plants and animals. They contain some of the most unusual animals on the planet. For example, giant tortoises, marine iguanas and even the Galápagos penguin.

On his visit to the islands in 1835, Charles Darwin noticed the slight differences between the same types of animal on each island. This helped him work out how they had adapted to their environment through a process called natural selection.

Today, tourists visit the islands to see the dramatic landscapes - volcanoes, beautiful coastlines and coral reefs - as well as the wildlife and plants.

People are only allowed to live in small areas of the island so that the wildlife and plants are protected. This is part of the conservation plan for the islands and the ocean around them. Other laws prevent things such as too much fishing, too many people living there or too many visitors. This will hopefully protect the variety of plants and animals and the beauty of the islands for the future.

Watch this short film to see more of the dramatic landscape and amazing wildlife of the Galápagos Islands.